The world has gone and become afraid of photographers; very afraid. Afraid of photographers with big cameras anyhow. There was a time when many tourists walked around with big cameras. Heck, even 4×5 view cameras “back in the day” (before TV and microwave ovens). Of course, these have been replaced for most tourists with the mighty cell-phone-cam-computer-stereo-wonder-gadget. Now days, anyone sporting a camera bigger than a Hostess Twinkie is suspected of nefarious activities. Oh, and carrying a tripod too? Could be used for mounting a rocket launcher I suppose. Why else would someone be carrying such a contraption with ISO 56 million soon to be released? 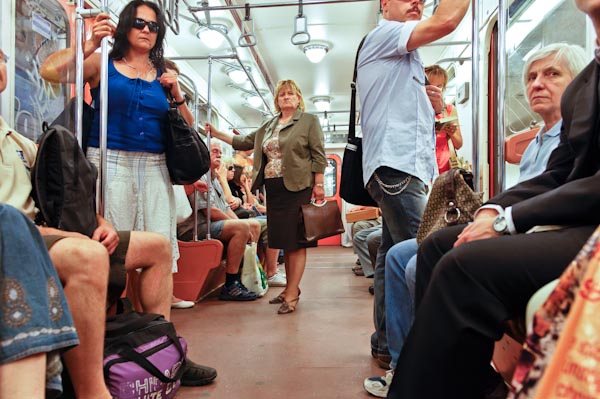 Confronting the Stranger with the Big Camera

I was up to my ears in suspicion yesterday while carrying said “big camera” and “rocket-launcher-tripod.” Perhaps it is also my “strange” photo subjects. I kink of fell in love with photographing in the Budapest subway stations at 5:00 am when few people were around. I think there is something kind of creepy yet hauntingly beautiful about these places, particularly when they are empty of people. But these places also have security cameras mounted in the ceiling all over the place. 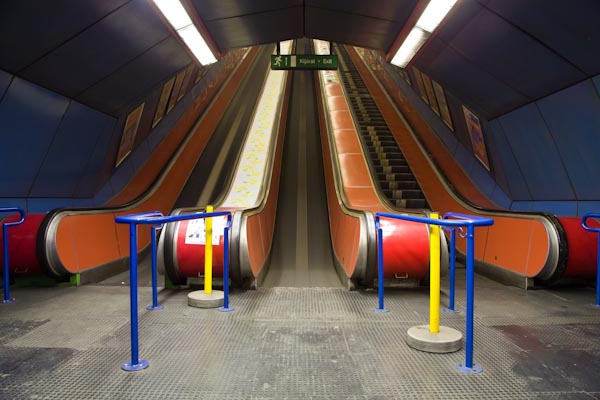 About an hour into my photographing the escalators, security couldn’t take it any more and sent two young kids to see what the heck the crazy foreigner was up to. They spoke even less English than I speak Hungarian (I don’t speak any). So, I showed them some images from the back of the camera. Images that showed empty escalators or dragged shutter images with me riding up and down the escalators and hand holding the shaking camera. You know; crazy stuff that only a camera nut would do. No, not a single image of missile silos or secret terrorist plots. The junior security men then scratched their heads while looking at me as if I had two heads, then gave me thumbs up and left me to my insanity and my escalators.

After finishing a meal at McDonald’s in Budapest, Hungary (I know how sad that sounds), I stopped to mount my camera on my tripod before heading out into the concrete jungle. But I didn’t even get the tripod head clamp tightened on the camera before I was pounced upon by an every vigilant Mickey D manager who admonished me, “no photography in McDonald’s.” Really? Are you serious? Are there legions of photographers hiding in the Golden Arches, just waiting to snap a pic of Britney Spears buying Happy Meals for her tots?

I mumbled something about the fries being too salty then fled the place. Out in the real world I began to look for something interesting to photograph. The last couple of days I had developed a fondness for phone booths. You know, those things that Superman would change into before cell phones and vandalism killed them all over the United States. Got it? Ok, so I see an interesting looking specimen sporting a pink phone. In fact, there was two identical booths not 10 feet apart. Except… one of the booths had a “poor” person leaning against it with a sign in Hungarian, likely asking for money since there was a little cup in front of him. Which one do I shoot? I spent nearly 10 minutes deciding and in the end, thought that the poor person added something to the photo. Something about a technological device (old as it was) propping up the back of someone who has likely been passed over by technology; someone who’s life has not been improved by technology. 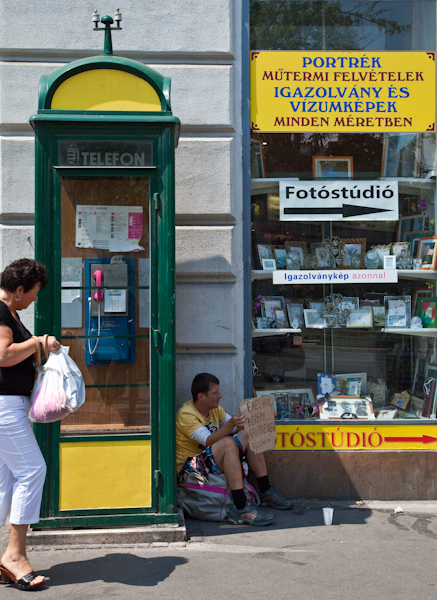 So I set up the tripod in clear view of the phone-booth-guy. I fact, I spent a good 5 minutes setting up before I snapped the photo. I figured, if he objected, I’d give him plenty of time to get out of the way or to wave me off, cover his face with his sign, etc. However, I didn’t seem to get any reaction so I made a couple of exposures. At least from him I didn’t get a reaction. But before I could leave the scene of the crime, I was pounced upon by an English-speaking Hungarian women who said that she was a photographer too and that what I just did was “illegal.” That if the police came, they would confiscate my camera card for invading the privacy of the poor person. That my photo would be viewed as showing the poor person in a negative light. She said that there were laws all over Europe making it illegal to photograph the poor without their verbal permission.

That must make photojournalism really tough to do. Ok. So I realize that the case could be made that photographing his “poor person” condition might make some viewers, some photographers, and some poor people, uncomfortable. But isn’t one of the steps to eliminating poverty, to show it? Should not artists do what they can to get people to view poverty and think about poverty, till society decides its had enough and ends it? Is ignoring it, avoiding it, not including it in art and media, going to solve the problem of poverty? I don’t know all the answers, but a photographic artist, I don’t feel that the poor should be invisible to my camera lens.

So I will soldier on with my big camera and dangerous tripod. Trying not to get arrested for photographing people and things that other people think I have no business photographing unless I’m either crazy or a terrorist or both.

This entry was posted in Hungary, Photography, Travel.